Equatorial’s 100% owned Mayoko-Moussondji Iron Project (“Mayoko-Moussondji”) has the exceptional advantages of having the potential to produce premium iron products and access to existing transport infrastructure. These advantages create the opportunity for production to commence at Mayoko-Moussondji at a fraction of the capital cost of almost all other African based iron ore developers and producers. Mayoko-Moussondji is located in the southwest region of the ROC. In March 2014 the ROC government awarded Equatorial a Mining Licence for Mayoko-Moussondji, giving the Company the exclusive right to mine within a 615.5 km² area that contains all defined Mineral Resources. The Mining Licence is valid for an initial period of 25 years and is renewable, upon application by Equatorial, for further periods of 15 years. Equatorial is now working with the ROC Government to quickly conclude the associated Mining Convention Agreement and definitive rail and port access agreements for Mayoko-Moussondji. 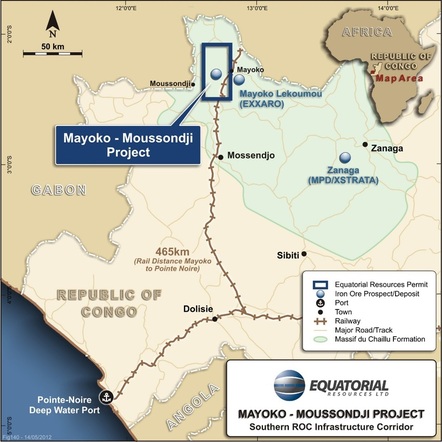 Details of Equatorial’s target product specifications for iron products from Mayoko-Moussondji are presented below: 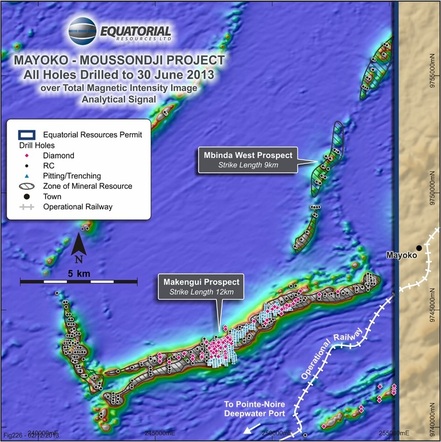 Mayoko-Moussondji Project Total Magnetic Analytical Signal showing resource area with drill collars
The project has access to an existing bulk haulage railway line that runs directly to the deep-water port of Pointe-Noire. Equatorial plans to commence initial operations at Mayoko-Moussondji using the existing railway line and port facilities that service the project. Initial production is targeted to increase in stages and the Company will seek to collaborate with other bulk commodity producers in the development of future large scale rail and port solutions.
SCOPING STUDY
In July 2013 Equatorial announced that it had completed a Scoping Study for Mayoko-Moussondji that investigated a staged ramp up of operations, recognising the ability to commence operations using the existing rail and port infrastructure that service the project, and will allow for incremental investment to increase capacity over time.

The Scoping Study delivered excellent results demonstrating low capital intensity and an initial mine life of 23 years for the production of 2 Mtpa of “Mayoko Premium Fines”, a 64.1% Fe product, with operating costs expected to average $41 per tonne FOB and total capital expenditure of $231m (ASX Announcement 16 July 2013).
Key outputs from the Scoping Study for Stage 1 and Stage 2 include: 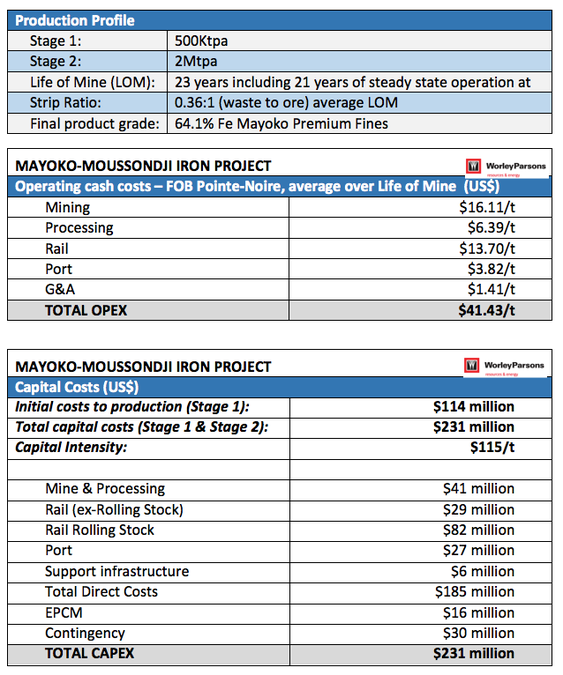